Home » Copic Sketch Marker Review: They’re Out Of This World

In this Copic Sketch Marker review I first compare the 4 different styles of Copic markers and then I evaluate Copic Sketch markers specifically including nibs, ink, colors, tips for working with Copics including blending techniques, and more. Copic markers are used by professional artists, designers, illustrators, students, crafters, hobbyists, and anyone who enjoys working with high quality permanent markers. You can safely rely on these markers for their consistency of color, the color system, and the manufacturing quality. Not only are Copic markers used to create highly detailed, finished marker drawings/paintings, they are also perfect for quick sketches and drawing on location. You can easily grab a handful of Copics, a sketchbook, and head out into the world to get inspired. Before we launch into the Copic Sketch Marker review itself, let’s address the pronunciation of “Copic”, the English translation of the Japanese name “kopikku”.  I emailed Copic USA for an official answer and here is their reply: “‘Copic’ is pronounced with a long O, like ‘roll’ or ‘mode.'” So, there we have it. Copic markers are made in Japan by the .Too Corporation which is headquartered in Tokyo. The .Too corporation was initially founded in 1919 (as Izumiya) Izumiya changed their name to .Too in 1992.

The 4 styles of Copic markers from top to bottom: Copic Original, Copic Sketch, Copic Ciao, and Copic Wide and a bottle of Copic Various (replacement) Ink.

The Four Styles of Copic Markers:

The aesthetic of Copic Sketch markers overall? As if Apple decided to make an iMarker. They’re minimalistic and modern and feel good in your hand. The light gray barrel is oval shaped with a darker gray band around one end that indicates the end with the brush nib. This tells you which end has which nib quickly without having to look too closely. There are icons of the nibs on each end also, but they are rather tiny and are only on one side of the barrel.

With two different nibs you can create a variety of different marks. The chisel nib produces at least two thicknesses of line depending on whether you use the short side/width of the nib or the wide one.

For me the star of the Copic Sketch marker is the “Super Brush Nib” which performs somewhat like a paint brush, but instead of being composed of individual brush hairs it’s made out of “molded fibers” i.e. porous, pressed, felt fibers. Similar to a paint brush you can control the width of the line depending on how hard you press down. Very light pressure produces a very thin line and of course the more pressure you apply to the paper the thicker the line gets. You can also use the brush nib on its side, parallel to the paper to draw a thick line. 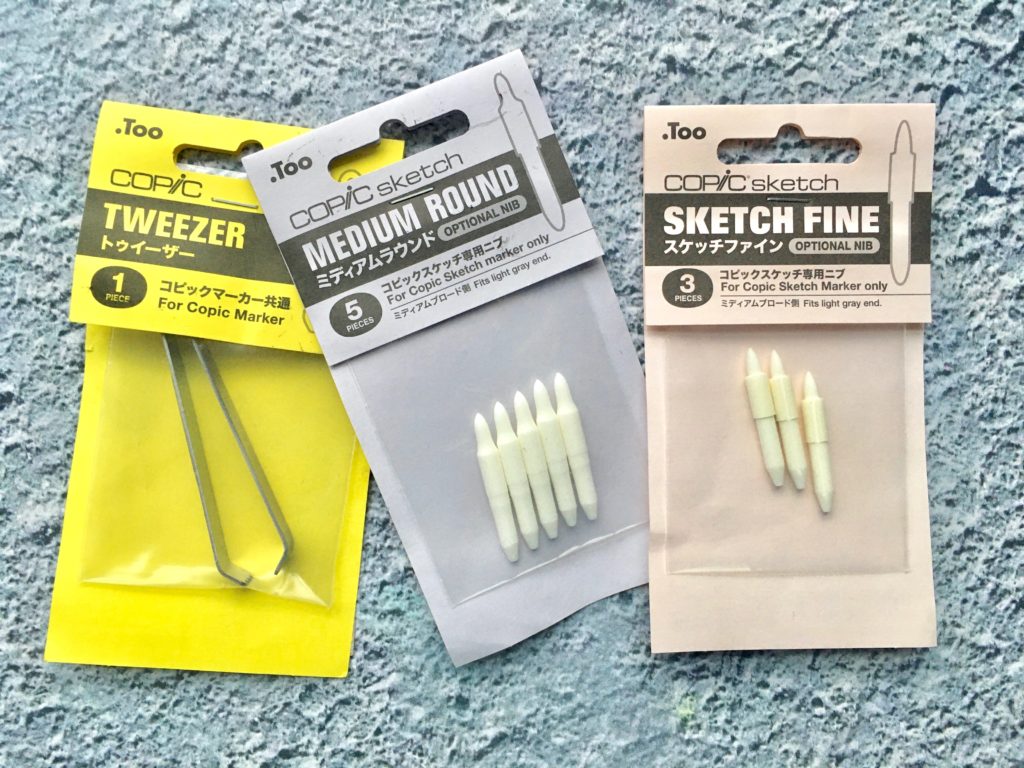 Two optional Copic replacement nibs for the chisel end of the Copic Sketch Marker: Medium Round and Sketch Fine with the Copic tweezer recommendend for changing them.

The ink is actually the same for all 4 styles of marker. It is an odorless, alcohol-based, dye* ink. This means the carrier for the dye is alcohol as opposed to water and since alcohol evaporates much faster than water they interact with the paper differently than water based markers. Which is to say, not much, since alcohol based markers won’t cause your paper to pill up or buckle the way water based markers can. Copics are easy to layer and the inks layer beautifully. The ink produces a beautiful velvety matte finish. Copic markers are “permanent” meaning the marker is indelible or waterproof not that it lasts forever. Copic Sketch markers are permanent but they are not lightfast. From the Copic website: “Dyes are artificial materials made through chemical processes and are not usually as archival as pigment products. In general, dyes are susceptible to ultra-violet rays. Copic inks are a dye and a Copic colored image will fade under direct sunlight or fluorescent light. If your artwork with Copic will be put up in well-lit area, it is better to seal it with a UV blocking seal.”

* except for the 4 fluorescent colors, none of which are in Set A

When you notice the color waning or the marker isn’t as juicy as it once was it’s time to refill the ink. A “Various Ink” refill bottle will get you 8-10 refills for Sketch markers. Refill inks can also be mixed to create custom colors and put into a Sketch Original empty marker.

If the brush nib is Polaris, the North Star, then the color range is Sirius, the brightest star in the night sky and the other major star of this set. Between the flexible brush nib and the gorgeous transparent ink you almost feel like you’re painting with watercolors. Although colors are somewhat open to interpretation, there are basically equal numbers of  standard or classic yellows, reds, oranges, purples, and greens: 4 each. So the colors are pretty evenly distributed as far as primaries and secondaries. There are however 10 blues, so Set A is strong on blues. Also included are gorgeous pinks and peachy colors, turquoises, teals, bright yellow-greens and of course many neutrals. Standout colors: Shock Pink (neon, bordering on fluorescent), Chrome Orange (melted orange popsicle), Lilac, (a bright, true purple), Blue Green (a deep, rich teal), Yellow Green (an almost neon spring green), Ultramarine Blue (a true, rich, intense ultramarine), and probably my favorite color of the set Cool Shadow (a beautiful, very pale aqua). One color I might miss when working with Set A would be a very pale violet. Because Copic markers are transparent, you can get some gorgeous layering effects and color mixes. The sky’s the limit once you start mixing and laying.

This review is based on my experience using Copic markers for roughly 3 years. My preferred medium is oil paint so there was definitely a learning curve as far as blending with markers. When I paint with oils I generally work dark to light, but with markers I tend to work light to dark in the same way I do with watercolors. Of course your methods may vary and you will find people who work dark to light with great results. Use the right paper ie designated marker paper. I use Copic X-Press IT paper throughout the review and for the Copic swatches in the Art Swatch Gallery™.

There are several different techniques for blending. But let’s step back for one moment, what exactly IS blending? Blending refers to mixing the inks to create a smooth, seamless transition from one color to another (for example yellow into green), or creating an imperceptible gradation from one value to another (for example when a dark gray melts into a light gray), or both. So really we’re looking for ways to minimize abrupt changes between one color and another, prevent marker streaks, and instead create one even, unified area of color. If you’re going to physically mix the inks you need to work quickly since the alcohol in the ink dries so fast. Once you get used to working with a certain amount of speed and you develop your own favored technique your blending will be stellar.

Copics are wet but not overly so. If you are using appropriate paper (designated marker paper) there is little to no marker bleed. Out of 72 markers maybe 2 or 3 produced a very slightly fuzzy edge. The vast majority produce edges that are crisp or ever so slightly velvety. If you end up working an area over and over you may get some bleed through to the back of the paper.

Violet and green swatches from the Art Swatch Gallery

Peach, Pink, and Red swatches from The Art Swatch Gallery™.

Each marker is labelled with an alpha-numeric code. For example “BG13”. The first one or two letters refer to the hue or the basic “color family”, in this example Blue Green.

The 1st number (anything from 0 to 9), what Copic calls the “blending group”, or how pure, saturated, and intense the color is. 0 indicates the most saturated color through to the number 9 which is the least. [In the Art Swatch Gallery I use words like “bright”, “vivid”, or “rich” to indicate more saturated colors and “subdued”, “dusty”, or “grayed” to indicate less saturated colors.]

The second number is called the “specific value” and represents how dark or light the ink is. 000 indicates the palest through 9 which is the darkest in value.

Click the button below to see swatches of all 72 colors in the Art Swatch Gallery™.
Disclosure: These Copics were purchased with my own funds. All opinions are my own.

Product Description: Set A - 72 sketch markers with chisel and round brush nibs and alcohol-based ink.

Copic Sketch markers are alcohol-based, professional quality, and available in 358 colors. The are dual tipped with a standard chisel nib on one end and a 12 mm long brush nib on the other. Highly recommended.

From The Art Swatch Gallery